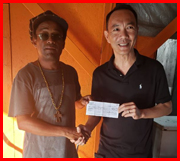 On Tuesday January 14, Dara Robinson, who runs a feeding program in the King’s Park Area of Belize City, got out of character to publicly ask the assistance of anyone, who could to keep his program alive. According to Robinson, it costs him some 3 thousand dollars a week to provide a midday meal to over 50 children of four schools around his neighborhood.
Dara is known to hold fund raising events to sustain his program, but he was quick to admit that while his name has become a household one, the reality is that his name has grown bigger than the program. The problem is that no benefits are accruing to the feeding program, so much so that he was serving what he thought was the last meal to the children as his pantry and freezer were empty of supplies.His impassioned plea for help did not go unnoticed, among the first to respond was Lee Mark Chang, who is not only a businessman but is also the UDP Standard Bearer for Caribbean Shores where the feeding program is located. Chang pledged a thousand dollars a month to the program for the duration of the school year. He said that he saw it necessary to create awareness for the feeding program for other businesses to follow suit. He said that Dara was doing a good job and the community needed to chip in to help the initiative. Chang said he will also ask others to assist in the program.