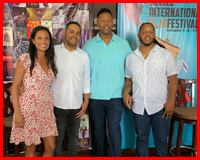 Belize’s 14th annual International Film Festival (IFF) kicks off this week, with the premiere night being held on Wednesday, November 6, 2019 at the Bliss Center for Performing Arts. There will be a myriad of film screenings up until November 10, 2019 at various locations including The Bliss, Ramada Princess Hotel and Casino, the Mexican Cultural Institute, the Digi Park, and Thirsty Thursday’s, all in Belize City. Premiere night featured My Father Belize, opening short, and On Happiness Road, opening feature.
My Father Belize, the opening short, is a thirty-minute film which was written, acted, directed, and produced by a mainly Belizean cast. Except for one actor, all other actors in the film are Belizean. Leon Lozano directed, wrote, and produced along with Ron Sierra, who also wrote and produced. The story is loosely based on Sierra’s story of being born in the United States of America to Belizean parents. As the plot, the main actor, whose life Sierra is loosely based on, is tasked with spreading the ashes of his recently-dead father, a man with whom he never had a close relationship, in Belize. Upon returning to Belize, he meets a woman, Aura, who he has known for some time and realizes that she has a son. He soon begins to question whether or not that might be his son. With those storylines, the film largely focuses on family, with an emphasis on fatherhood. The film was mostly shot in the southern village of Placencia with some shots in Belize City and took just over a year to complete from writing the story to having a final film. In this film, Aura is played by Kisha Sierra and Cousin Nigel is played by Kerby Garcia, both Belizean.
The opening feature, On Happiness Road, is a story about a girl, from childhood to when she’s grown up; from the 1970s to 2010s. It is not only her story, but also the history and record of Taiwan in this forty years. Mark Ang, a Taiwanese filmmaker, is the guest speaker for Wednesday’s opening which will be hosted by Belizean born, Kendis Gibson, who is now with the MSNBC network. The Taiwanese filmmaker and screenwriter is the founder of Formosa Festival of International Filmmaker Awards and the C.E.O. of the fifty-eighth Asia Pacific Film Festival. Ang has won fifty-six awards since 2014 for his short film entitled, “Replace,” and his goal is to introduce Taiwan to the world through his audio visual work. Through the Spotlight Taiwan Programme, the idea is that Belize will be able to tap into the Asian industry. He says that like in Taiwan, Belize’s film and other creative industries are lacking financial support. While we will have talented actors, directors, and other creative persons, we cannot go as far as we might want to when we consider the lack of funds.
In total, the films reign from fifty- eight countries and according to Suzette Zayden, Associate Director, Institute of Creative Arts (ICA) – National Institute of Culture and History (NICH) and Founder and Director of the Belize IFF, this year has seen the most submissions, over 250. The IFF will feature several categories. In the Feature Length Narrative category, where there were approximately forty-four submission, twelve were chosen. Those include “10 Seconds to Win”, Brazil; “Black Ashes”, Costa Rica; “Harpoon”, Belize/USA; “Love Lives Here”, South Africa; “On Happiness Road”, Taiwan; “September”, Guatemala; “Sprinter”, Jamaica/USA; “The Black People”, Mexico; “The Bottle”, Belize; “The Sweet Taste of Salted Bread and Undies”, The Philippines; “The Return”, Cuba; and a twelfth closing film which has not yet been announced. There were over fifty submissions in the Feature Length Documentary category of which eight were chosen.
In the Short Narrative category, only twenty-one items could be chosen out of the more than 100 submissions. Those are as follows: “My Father Belize”, Belize/USA; “Tecuani and the Duende”, Belize; “Deliverer”, Trinidad and Tobago; “We Will Live”, Cayman Island; “Flight”, Jamaica; “Sides of a Horn”, USA/South Africa; “IGF”, Canada; “Oseyi and the Masqueradors”, Dominica; “Amanie’s Veil”, Brazil; “The Infiltration”, Argentina/Brazil; “Fragments of Time”, Mexico; “God’s Door”, Egypt; “Pozole”, USA; “Waves”, Brazil; “My life with You”, Brazil; “Fakana”, “The Black Pen”, and “The Red Ball” each from Tonga; and “Koriva”, “My Mother’s Blood”, and “The Education of Grayson Toki”, all from Papua New Guinea.
Fifty-two submissions were entered in the Short Documentary category and ten were chosen. In the Music Video category, approximately thirty-submissions were received, ten of which were chosen. Those are “On Da Radio”, Ras Indio; “Stop the Violence”, T. R. Shine; “Hamala”, The Garifuna Collective; “Bombest Love”, Marilyn Vansen; “Styling”, Nello; “Bun Down Babylon”, Dice Pandy; “Any Means”, T.Y. ft. Rush; “Woodgrain”, Leigh Paris; “A Girl Like You”, Supa G; “Namule”, Concego; “Ratings”, Dice Pandy; “Chocolate”, Marilyn Vansen; and “Striving”, Trouble. These will be screened at Thirsty Thursday’s on Saturday, November 9, 2019.
There are some sidebars, including something called “Green Globe”, an environmental section, which shows the work that has been going on in Belize’s environmental community, and “Branded Entertainment.” Besides those, there is also a showing of Belizean Shorts including “Macaws”, “WCS Smart”, “Doe Worst Nightmare”, “The Haunted Wife”, “Hair Wolf”, “IGF”, “A Food Man”, and “Time Fu Eat.” “Time Fu Eat” is a fifteen minute short directed by Carlo Habet, a Belizean, who originally wrote the screenplay alongside Andre Habet. The narrative was alter produced by Veritas Production and aims to be entertaining while being socially conscious. Carlo and Andre say that the short came from the want to get into the film industry in Belize, having done short commercials and music videos, without the complicities of too many difficulties.