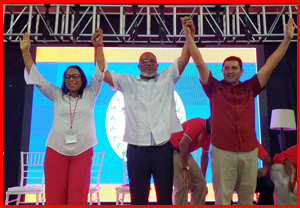 Minister of National Security, Hon. John Saldivar on Sunday November 3 officially launched his bid for Leader of the United Democratic Party. In an atmosphere packed with fanfare inside the Civic Center in Belize City, thousands of party faithful including area representatives, standard bearers and party supporters gathered for the event.
Shortly after 11a.m. the ceremonies got underway where the team was officially introduced. Joining him on stage were Mesopotamia Standard Bearer, Shyne Barrow; Belmopan Mayor and Deputy Chairman aspirant, Khalid Belisle; Second Deputy Leader aspirant Beverly Williams; First Deputy Leader Aspirant Hugo Patt; Punta Gorda town Mayor, Ashton Mckenzie; Dangriga Area Representative, Frank ‘Papa’ Mena; San Pedro Town mayor, Daniel Guerrero and introduced well into the program, Hon. Michael Finnegan.
It was all celebration as each of the speakers highlighted the need for unity going into the convention. Speaking plainly, Hon. Saldivar explained that the UDP can continue to deliver victories, the caveat however being that there be consensus. He noted that the party must remain committed the principles of good governance, transparency and accountability. “We must continue to make plain that our number one obligation is to the people of this great nation,” he stated. He highlighted the accomplishments of UDP with our massive infrastructural boom across the country in rebuilding highways and constructing new ones. He reminded the audience of the improvements in sports stadiums, education, healthcare and social service programs like the food pantry and the BOOST. One of the announcements he made was that under his leadership the government will seek “housing and shelter solutions for all.” He cited construction of shelters, making housing subsidies available for the working poor and affordable mortgages for the working class. Minister Saldivar also ventured to state that this can only be possible through close partnerships with the private sector with whom he said he will continue to foster a close working relationship.
The UDP’s National Convention will be held on Sunday, February 9, 2010 at the Belize Civic Center.