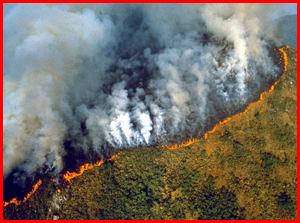 By Jem Smith
The Amazon Rainforest, of 60% of which can be found in Brazil and has been termed the Earth’s Lungs, has been burning for weeks. Record-breaking fires are ripping through the Amazon, an ecosystem on which the whole world depends, and it seems that almost no one is talking about this. There have been unprecedented numbers of fires ravaging through Brazil since the start of 2019, more than 74,000 so far, and a noticeable intensification in August. That is approximately an 80% increase as compared to the same period of 2018 and, sadly, most of those fires have been taking place in the Amazon Rainforest.
That rainforest, which covers 5.5 million square kilometers or 2.1 million square miles, accounts for approximately 20% of the Earth’s oxygen; not just Brazil’s oxygen, but the Earth’s. It therefore absorbs significant levels of carbon dioxide and is home to 10% of all known species including the 40,000 plant species which have the job of absorbing CO2. It is no longer an issue concentrated to just Brazil, it has now become a global problem. Millions of animals and trees have been killed.
But why is this important? And why is it important to Belize? Via air travel, Belize sits over 3,000 miles away from Brazil. And we have our own problems, our own trees to provide our oxygen, and our own animals to consume and balance our ecosystem. It does not directly affects us and does not affect us nearly as much as the country’s crime and violence affects us. So why worry, right?
Not right. Wrong, completely wrong. As I previously mentioned, it is a global problem. Unlike the Notre Dame, which was mostly destroyed in flames in April of this year and received so much media coverage and donations from billionaires, we cannot rebuild the Amazon if it is permanently destroyed. The world has a lot to lose if we lose the Amazon if these (intentionally set) fires continue. Everyone on the planet benefits from the health of the Amazon. As its trees take in carbon dioxide and release oxygen, the Amazon plays a huge role in pulling planet-warming greenhouse gases out of the atmosphere. Without it, climate change and global-warming speed up.
But as the world’s largest rainforest is eaten away by logging, mining, and agribusiness, it may not be able to provide the same buffer. Because these fires are not forest fires; the Amazon has not combusted out of nowhere- these are intentionally set fires to clear out the forest. Experts say deforestation and the practice called slash-and-burn are to blame for most of the flames. People cut down patches of forest, allow the area to dry out, then set the remains ablaze to make room for agriculture or other development.
Brazil’s president Jair Bolsonaro’s administration, which had pledged to open up the Amazon to more development, has sought to shift attention away from deforestation. During his campaign, the far-right candidate called for setting aside less lands in the Amazon for indigenous tribes and preservation and setting more aside for industry and agriculture. His policies have been politically popular among industry and agricultural interests in Brazil, even as they’ve been condemned by Brazilian environmental groups and opposition lawmakers. But those decisions will have far more negative impacts on the earth than beneficial economic impacts on Brazil.
The fires have called international attention to the dilemma of the Amazon and have publicly criticized Bolsonaro’s environmental policies. President of France Emmanuel Macron went on Twitter to call for action, pushing for emergency international talks on the Amazon at the G7 summit. On August 26, 2019, the world’s seven largest economies offered Brazil more than $22 million in aid to help it get the fires under control. Bolsonaro promptly turned down the money, accusing Macron on Twitter of treating Brazil like a colony. Some in Brazil, including Bolsonaro, see the international aid as an attack on Brazil’s sovereignty, and its right to decide how to manage the land within its borders. Bolsonaro has since changed his mind, saying that he will reconsider the deal. On the August 27, 2019, Bolsonaro accepted $12.2 million in aid from the UK and deployed the military to help battle the fires, sending 44,000 troops to six states.
Unfortunately, those actions are hardly enough. There are 778 municipalities throughout the Amazon with only 110 of them having fire departments. There are inadequate capacities to prevent the spread of and completely extinguish the fires but, as someone living in Belize, I can only hope that the fires can be contained, controlled, and smothered, for the sake of the Amazon, Brazil, Belize, and the world.