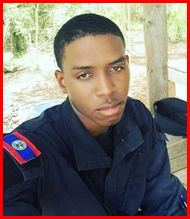 Police investigators from Belize City are attempting to solve the weekend murder of 25-year-old Devaun Mascal. He recently left the Belize Coast Guard as a serving officer.
?At around 12 a.m. on Saturday, August 31st, 2019, officers responded to reports of a shooting at a house at Mile 4 and a half on the Philip Goldson Highway. When they arrived at the residence, they found Mascal’s lifeless body. Someone reportedly fired multiple gunshots at him, and he was fatally injured by one.
?What investigators have been able to establish is that Mascal arrived at home with his girlfriend. He had just exited his car, and he was reportedly trying to check the vehicle’s battery poles.
?That’s when a gunman emerged from the darkness and opened fire on him. He reportedly tried to flee, but he was injured by one of the bullets, which claimed his life. Reports are that his assailant then hopped into a nearby vehicle and drove away from the scene.
?At this time, it is unknown why Mascal was executed in this manner, but coincidentally, his home was the scene of a previous crime. A month and a half ago, this same house was raided by police, and that’s when they came across 27 packages of high-grade marijuana totaling over 50 pounds, and over $12,000 in cash. The 2 residents, who were present at that time, are on remand at the Belize Central Prison on drug trafficking charges.
?It is also unknown if Mascal is related to that couple since he had reportedly moved to that home recently.
?Mascal served for a number of years in the Belize Coast Guard until he resigned as an officer several months ago.