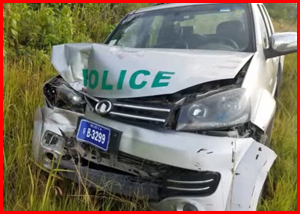 A police inspector could possibly be facing criminal charges for an accident on the George Price Highway that has landed 60-year-old Rejinaldo Ruiz in a coma at the Karl Heusner Memorial Hospital. Ruiz, a father of four from Camalote Village in the Cayo District, has suffered head trauma after he was flung from his motorcycle.
A husband and wife from the neighboring village of Saint Matthews were on the right during the time of the accident, and she has recounted what she saw while they were heading to Belmopan.
Barbara Fisher told the press that at around 5 p.m. on Sunday, September 1st, she and her husband were on the way when they saw a man on a red motorcycle coming in the opposite direction. They were passing an area between Miles 44 and 45 on the George Price Highway.
They saw a police mobile heading in the same direction of the motorcyclist, and suddenly, the vehicle rear-ended the motorcycle.
Fisher said, “the police vehicle was coming the same way as well when the police vehicle hit the motorcycle. It flung the man up, and then down again. So, immediately, we just parked over the next side, and my husband went out to see where he can assist in any way. Then, the police vehicle just went down a little bit more, before it stopped, like about two minutes away down more. The driver, the policeman, came out, and he ran up to where the victim was.”
They managed to rush him to get medical attention, but in transit, he went into a coma, from which he has not yet awakened.
Police say that the driver of the police mobile at the time was Inspector Clifton Jones, and he was attempting to overtake Ruiz on his motorcycle when the vehicle hit the cycle from behind. He has given police a statement to recount the accident from his perspective. He has also given a urine sample, and he was served with a notice of intended prosecution.
Ruiz has since been receiving medical treatment at KHMH, and his family is worried about his recovery. The impact did not give him many scrapes and bruises, but trauma to the head is the biggest concern. His family is simply hoping for the best, and they are insisting that police conduct a proper investigation, especially because one of their own is involved.
At the time of the accident, Ruiz was reporting to work at Caves Branch Outpost.