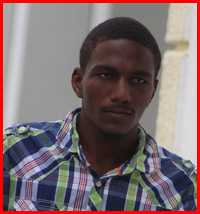 Ibrahim Smith, 27, is presently on remand awaiting sentencing for murder, after he was found guilty of the November 25, 2012 murder of 22-year-old William Felix Francis. Francis was gunned down inside his home on Mahogany Street. He was shot multiple times and died inside his living room.

In the trial, the crown, represented by Sheneiza Smith of the DPP’s office, called ten witnesses to the stand. The crown’s main witness was the victim’s brother, Felix Francis. Francis was inside the house at the time of the murder, unbeknownst to the killer. He says that Smith entered the house and asked his brother for a man by the name of Malic. His brother responded that no one by that name resided there. The gunman appeared not to have believed William and that is when Francis said that Smith pulled out a gun. He pointed it toward William and Francis jumped through a window and hid. Several shots were heard and when the shots subsided, he made checks on his brother. He was lying on the floor with as many as six gunshot wounds to the upper left side of his body. Francis reportedly saw Smith running out of the house.

The trial against Smith commenced on May 2, 2019 and concluded on July 16, 2019 when he was found guilty. He was remanded until his sentencing which will take place in September 2019 before Justice Marilyn Williams. In trial, Smith was represented by attorney Leeroy Banner.