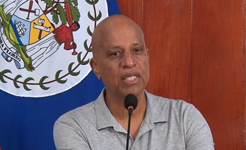 The Government of Belize announced on Wednesday, July 29th that 10 million dollars is being made available for tourism industry operators as loans for working capital. Prime Minister, Rt. Hon. Dean Barrow along with the Development Finance Corporation’s (DFC) general manager, Natalie Goff, and Financial Secretary Joseph Waight made the announcement during a virtual press conference.

After the Prime Minister’s intervention with the Caribbean Development Bank (CDB), from where the finances are being derived, the bank gave approval for the DFC to be able to on-lend for working capital. Previously, the bank did not allow for that kind of lending. Another restriction was the rate of interest at which the lending would take place originally it was in the region of 8 % but the DFC managed to bring that down to 7%. PM Barrow stated that additionally the government would subsidize a 1% interest rate taking the repayment rate by the barrowers to six percent.
DFC’s Natalie Goff explained that while the DFC does not offer loans for working capital with the Prime Minister’s intervention that is now being made possible. Some 10 million dollars are being identified for working capital for use to pay salaries, wages, utilities, fuel, financing of payables, insurance maintenance, health and safety standards or anything that is a recurrent expense for the business.
Belizean businesses or persons, who have Belizeans employed will be considered. The business should show sound financial performance as well as present tax statements. Businesses can barrow up to one million dollars but it is expected that those will be minimal as the target is to disburse small loans to as many borrowers as possible. “The purpose is to maintain economic activity and recovery,” stated Goff. She added that borrowers are expected to maintain at least 30% of their work force. The loans will have a repayment period of five years with a one-year grace period. Depending on the size of the loan, collateral can include real estate, third party security or chattels and or assignments.
The program will be launched on August 3rd.